A rather ordinary-sounding nursing home lawsuit in Washington is premised on some rather unusual facts. Instead of nursing staff perpetrating abuse upon the residents of the home, the home is being accused of permitting residents to abuse one another. According to the petition filed on behalf of the plaintiffs, The Cashmere Convalescent Center is being sued based on allegations that nursing staff allowed one resident to sexually abuse other residents in the home’s dementia ward.

When a Nursing Home Resident Abuses Another

Where a nursing home employee abuses or neglects residents of the home and the residents suffer injuries or other harm as a result, the law is clear that the injured residents can recover compensation for their losses and expenses. Depending on the heinousness of the abuse, punitive damages may also be available.
Although the case from Washington appears to be a case in which a resident abused another resident, there are actually two culpable parties: the abusive resident and the nursing home employees who knew the abuse was occurring and did nothing to stop the abuse from occurring. The nursing home itself can also be liable under a legal theory which allows lawsuits against employers whose employees commit careless or injurious acts against others while those employees are performing their job duties. 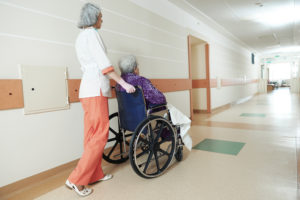 But the Nurse Did Not Commit an Act – Did She?

One of the elements of a lawsuit against a negligent individual or business requires the injured party to show that a “duty of care” was breached – that is, that the defendant did not conduct him- or herself in a reasonably prudent manner. Most commonly, this “breach” of the duty of care occurs as the result of specific acts and actions. In most cases, the “duty of care” does not require one person to prevent harm from occurring to another. For example, if you are walking along the street and see a bicyclist about to be hit by a car, you are under no legal obligation to help the bicyclist or prevent the accident.
But the rules are different where a “special duty of care” exists. The law recognizes that some individuals are placed in a position of special care or trust over others. As a result, they not only must take care not to commit negligent acts that harm others, but they have a duty to take reasonable steps to prevent harm from occurring to others. The classic example of this principle involves a teacher and his or her young students: that teacher is required by law to take reasonable steps to protect the students from harm. Nurses and staff at a nursing home have a similar obligation to residents: not only must they not commit any injurious acts toward the residents under their care, but they must also take reasonable steps to protect those residents from harm as well, particularly where they have notice of the risk. By failing to take action and prevent one resident from abusing another, the nurse and nursing home may be civilly liable for compensation to the abused residents.
Has your loved one been injured or abused in a nursing home? Don’t hesitate to contact David R. Price, Jr. for a consultation on your case in Greenville.