Play for Pay: The NCAA and Workers’ Compensation

Homepage » Blog » Play for Pay: The NCAA and Workers’ Compensation 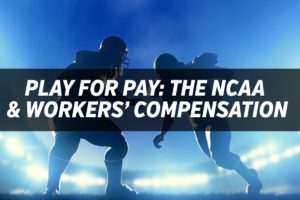 We’re in the midst of a new school year and the issue of whether college athletes should be compensated has once again hit the airwaves. Most players receive athletic scholarships, but most are only for one year and are subject to the approval of the players’ coaches. Since 2012, the NCAA has allowed colleges to offer multi-year scholarships—there have been four hundred NCAA multi-year scholarship athletes in South Carolina alone—but it is still a rarity and many coaches have resisted the change. But the change to allow multi-year scholarships may have come too late: Former Division I football have players filed a class action suit against the NCAA for the years when multi-year scholarships were banned. There are supporters and detractors on both sides, but what few people realize is that part of the NCAA’s reluctance to compensate players is out of concern over liability for workers’ compensation claims.

Playing Sports as a Volunteer

Although college athletes have to train, play and are under as much pressure and scrutiny as professional players, there is one major difference between college and pro players: payment for playing. College athletes are offered a scholarship as an incentive to play for their school, but under the law, these athletes are volunteers—not employees. Under South Carolina law, volunteers are not considered employees and thus are not eligible for workers’ compensation. Therefore, college athletes cannot receive certain benefits entitled to most employees, including professional athletes, such as workers’ compensation if they are injured while on the job. And unfortunately, players are injured quite often while on the field or while training as part of their job as athletes.

But what about those of us who are not college or professional athletes, but play on the company softball, kickball or bowling team? Would we be able to collect workers’ compensation if we are injured while playing a sport with our co-workers? Before August 2014, the answer would most likely have been a definitive no. But after the South Carolina Supreme Court ruled that Stephen Whigham, an employee in a public relations and marketing company who was injured during a company kickball game was eligible for workers’ compensation, the answer has become less clear. Although the Supreme Court held that volunteers are still not eligible for workers’ compensation, they found that Whigham was required to participate in the company kickball game that he organized and thus was injured as an employee, not as a volunteer, and therefore can collect benefits.

Some found the decision in the Whigham case to be quite controversial and it has major repercussions for employees in South Carolina, particularly those who participate in after-hours activities. Like college athletes who are injured during a game, most employees are still unlikely to qualify for workers’ compensation benefits, but after Whigham, it is no longer impossible. Those who have been injured during an after-hours activity, such as a company game, should consult with an experienced workers’ compensation attorney to see if they qualify for benefits.