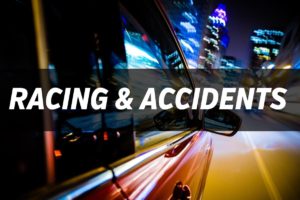 Tony Stewart, a three-time NASCAR champion, returned to the road during the Sprint Cup competition over Labor Day weekend—the first time he has been on the tracks since his car collided and killed fellow driver, Kevin Ward, Jr. On August 9th, both Ward and Stewart were competing in a sprint car race in upstate New York when Ward’s vehicle was bumped against an outside wall and spun out. Ward exited the vehicle and allegedly waved his hands to confront Stewart. Another driver swerved to miss Ward but the right side of Stewart’s vehicle clipped Ward, who was then thrown in the air. Ward died of blunt force trauma.

Drag Racing and the Public

Racing is not limited to professional tracks—drag racing can occur anywhere where there are roads and drivers with an urge to speed.  There are several drag racing venues in South Carolina where speed and vehicle enthusiasts can watch and maybe even participate in adrenaline-fueled activities, but under no circumstances should racing occur on public streets and highways.

The South Carolina Department of Motor Vehicles (DMV) can revoke a driver’s license for racing on a public street or highway. Racing in public is dangerous because there may be other motorists or pedestrians who can be injured or even killed.

Lending your vehicle to another person is also risky, even though you are not the one behind the wheel. The DMV can suspend the driver’s license of a person who lends their vehicle to another for the purpose of racing on a public street or a highway.

Stewart was investigated for causing Ward’s death, but authorities did not find evidence to support a charge of criminal intent.  NASCAR allowed Stewart to return to the tracks, although the organization has changed one of its safety rules.  In the aftermath of Ward’s death, NASCAR announced a new rule requiring drivers to not exit a crashed or disabled vehicle, unless it is on fire. Instead, the driver should wait until safety personnel have arrived.

An Attorney Can Answer Your Questions

If you have been injured by drivers who were racing, speeding, or otherwise negligently or recklessly caused your car accident, you should to speak with a car accident attorney to make sure you recover all the compensation you are entitled to as a result of your injuries.